I watch a lot of TV, and I’d recommend almost all my shows to anyone, but I know that not everyone will appreciate the darkness of Daredevil or the drama of Unreal. But there is one show that I think everyone will love. I’m always quick to suggest it as it quickly became one of my all time favourite shows: Parks And Recreation. 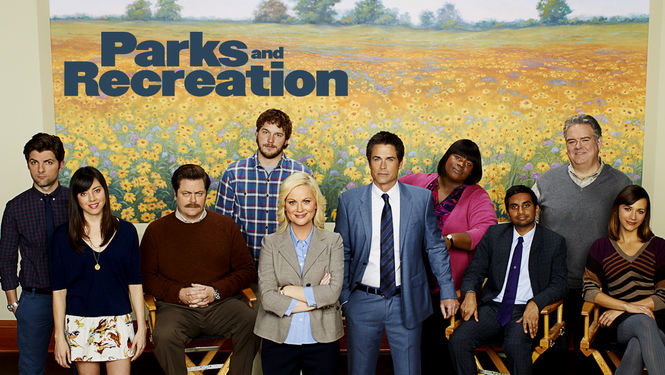 Parks And Rec is a mockumentary show that follows the lives of the employees of Pawnee, Indiana’s parks and recreation department. The main character is Leslie Knope, played by Amy Poehler, and Leslie is the single best female character to ever exist. She’s smart, funny, pretty, confident, determined, kind and resourceful. But more on her later.

This show is a comedy, and when I say that, I mean that it’s actually funny. Literal laugh-out-loud lines and jokes that stick with you. And what’s more is that none of the jokes are offensive. So many shows today rely on mean jokes (eg. The Big Bang Theory) or purely sexual jokes (eg. Two And A Half Men) or jokes that are just offensive to minorities (eg. Family Guy). Parks And Rec has none of that. Aside from a few innuendos, this show is great for all ages!

If you liked The Office, you’ll like this show. In fact, the show’s creator, Mike Schur, was a writer on The Office. Some of the humor is somewhat subtle, but it’s a lot funnier than The Office, and you don’t have to hate-love anyone like with Michael Scott. Because all the characters are so, so likable. Seriously, I can’t even begin to explain how great these characters are. Each one is so funny in their own way, so special, and play such an important part of the show. And they’re all flawed in some way. Even Leslie Knope has flaws, and so you really understand these characters and they feel like friends. They’re all confident in themselves. Ben is a nerd but a proud one. Ron is stubborn but loyal. Chris has some mental problems but will happily tell people about his therapist. Andy isn’t the smartest but he knows that and makes up for it in other ways. Such dimensions on characters, especially on a comedy show, isn’t very common.

Parks And Rec is a feel good show in every way. Not only is it just a cheery show, but the deeper stories inspire. I think about Leslie Knope a lot. She doesn’t have a glamorous job, but she loves what she does and great goals. Through her dedication at work, she was able to achieve so much, make so many great friends, and even meet the love of her life. She inspires me to be a better female, a better worker and a better friend, and I’m sure she’ll inspire all of you too.

I seriously urge all of you to give this show a try. It’s seven seasons, but the first season is only six episodes, so you can knock that out in two hours! I must admit, though, that the first two seasons are not the best. They’re good, and I’ll happily watch them, but the show really picks up in the third season when Ben and Chris come in. So if you can get through the first bit, then I promise that you’ll love it. Everyone I know who’s seen the show absolutely adores it.