(AKA Three Quotes for Friday)

For today’s quotes I decided to take an author that you all consider ever so boring. By the time you finish reading this, however, you’ll realise he’s an author worth reading.

(At least that’s the theory.)

To begin with, let’s have the author’s picture: 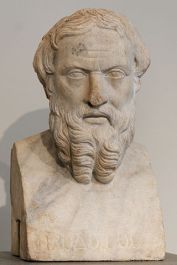 For my part, what I consider boring… is biographical facts. So I’m going to keep this part short – mercifully we know next to nothing about him.

He was born in Halicarnassus in Caria (we know this because he told us) – nowadays called Bodrum in Turkey. He lived in the 5th century B.C. which makes him a contemporary of Socrates (of drinking hemlock fame). However, unlike Socrates, our author died peacefully in his bed. For all we know.

Life (Being the Part between Birth & Death)

Our author is a much travelled person. Even by today’s standards he was well travelled – that means he’s been to more places than I have. His travels took him to Egypt and Tyre, and down the Euphrates to Babylon. He wrote a book about his travels although he then disguised this in the middle of a much longer history book. He’s a single book wonder.

After returning home, he became unpopular in his home town: maybe he dabbled in politics or the locals had enough of his outrageous tales about giant gold-digging ants in India and women urinating standing up in Egypt. So he moved to Athens where the Athenians paid him to shut up and finish his book.

Having finished it, he went to Olympia to read it out at the festival (as was the custom among authors at the time). Here he either:

Unlike Thucydides, this author is highly entertaining because…

Just like me, he never voluntarily sticks to the point:

Since my history proceeded from the first seeking occasions for digression… (IV.30)

Yet he could be succinct when he wanted to:

For no one is so senseless as to choose of his own will war rather than peace, since in peace the sons bury their fathers, but in war the fathers bury their sons. (I.87)

It is clear that not in one thing alone, but in many ways equality and freedom of speech are a good thing. (V.78.)

I usually just call him by his name: Herodotus.

(For more quotes by Herodotus, visit: Best Stories of Herodotus – a work in progress!)